Warsaw, Sopot and Bielsko-Biala are the best places to live in Poland – the most…

Warsaw, Sopot and Bielsko-Biala are the best places to live in Poland – the most sustainable cities – according to the 2016 edition of the Europolis report, prepared every year by the Schuman Foundation and the City of Warsaw, along with Polish and European partners. The report is a detailed look into lifestyles and local governance in 66 Polish cities.

Since 2013, the Schuman Foundation and the City of Warsaw, along with Polish and European partners, has prepared a report entitled Europolis. Every year, the report focuses on a specific topic. This year’s fourth edition was dedicated to sustainable cities with respect to the quality of life of their inhabitants, specifically four aspects of sustainable development: the environment, society, governance and economy.

The good news is that whether you prefer a vibrant capital city, the sea breeze on the coast or a breathtaking view of mountains, you can enjoy all this in the best Polish cities according to Europolis. Warsaw, Sopot and Bielsko-Biala dominate the ranking, which includes 66 cities of various sizes.

The report provided a detailed examination of each aspect studied: from local wages to the percentage of children attending kindergarten, the number of cars for every 1,000 inhabitants, the percentage of people relying on social care, the number of people dying of cancer or heart disease, the total mileage of bicycle lanes, waste production per capita and the percentage of women on the city board, as well as investments in infrastructures and the number of inhabitants who use e-administration… now you’ll know everything there is to know about these 66 Polish cities – as soon as you learn to pronounce them 😉

And the winner is… Warsaw

Warsaw dominates the ranking with 534 points out of 1,000, closely followed by Sopot and Bielsko-Biala. This general figure shows there is still quite a lot of room for improvement to achieve the perfect city. Behind this overall ranking are some differences depending on which one of the 4 aspects of the sustainable cities (environment, society, governance, economy) studied in the report is brought into focus. 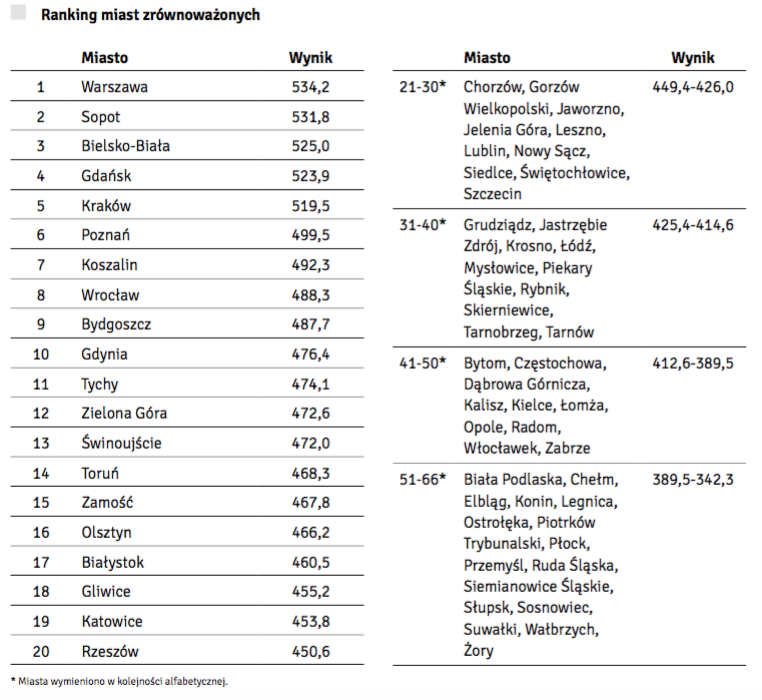 As expected, the Polish capital has a strong economy (540.1 points), but didn’t quite make it to first place. Sopot (601.5 points) got more points in that field. Although the nation’s capital attracts businesses (295 companies for 10,000 inhabitants) and foreign investments (PLN 76,100 per capita, 10 times more than the average city), Sopot is definitely beloved by tourists (and many companies want to establish themselves in the Baltic city) and citizens overall – the city got the most likes on Facebook per 1000 inhabitants: 884.6 (140 for Warsaw). Sopot also has more housing eligible for 30Mb/s Internet service.

Whereas Warsaw offers the best quality of living in the country (632.8 pts against 529 on average), the second highest wages (PLN 5,200/month against PLN 3,700/month on average nationwide) and larger apartments than the national average (30 m2 per capita against 25 m2), only 3% of Varsovians rely on social care (against 6% on average). And although only 57 persons per 10,000 inhabitants die of cancer or heart disease (compared to 70 Poles on average), the capital is only in 21st position when it comes to political and environmental aspects.

Surprisingly, whereas almost 25% of the capital is covered by green spaces (79 parks in the city), CO2 emissions stand at 117 ton per hectare (118 on average) – probably due to the 600 cars per 1,000 inhabitants – among the highest rate for a European capital – and the city invests almost nothing to preserve the quality of its air (PLN 3 on average per capita in other cities). Not surprisingly, however, Varsovians consume a great deal more than their fellow citizens in other cities, 984 kWh per capita (against 717 on average), and produce 232 kg of waste yearly – 17 kg more than the average Pole.

Warsaw also ranked low when it comes to politics and the “digital lifestyle” – in 21st place. Only 21% of City Board Members are women (against 25% on average in the country). The fact that the mayor is a woman in her third term who was elected in the first round for her second term didn’t earn the city extra points. A consistently bad point for Warsaw over the years has been the spatial development plan since only 16% of the city has one. Finally, Varsovians take greater advantage of e-administration than Poles living in other cities.

This coastal city of 37,000 inhabitants definitely takes advantage of its position in the dynamic Tricity (an agglomeration of 3 neighboring cities: Gdansk, Sopot, Gdynia). The Polish summer capital (531.8 points) is barely ahead of Gdansk in the ranking (523.9 points). Attracting the most tourists in the country (5,000 per 1,000 inhabitants – twice as much as Krakow, if you can believe it), the smallest of the three sister cities is also home to many businesses and investments. The tourist sector is a very strong engine for the local economy.

With 175,000 inhabitants, this Silesian city ranked high thanks to its good environmental situation, its low emissions and the high numbers of green spaces in the city. In addition, almost all city councilors have a higher education than the average in Poland and Bielsko-Biala is governed by a very well-balanced mix of council members in terms of gender.

The comparison underlines the bike friendly policy of the oldest of the Tricity sisters. Gdansk encourages its citizens to ride their bikes by developing an adapted infrastructure: narrowed streets and a speed limit as low as 30km/h in many areas. Indeed, Gdansk inhabitants seem to really enjoy biking as the city won the European Cycling Challenge this year (see our article http://go-local.pl/2016/07/27/poland-cycling-capital/).

Bike lanes already cover 568 km and more are being built, although the city does not yet have a city bike sharing system, but it should be installed in 2018.

Gdansk was ranked 4th thanks to its high scores concerning the environment. Although the city produces only slightly less CO2 than the average (116 tons against 118) and doesn’t invest in preserving air quality, the Baltic city compensates for this by having 17% of its territory covered by forests and another 3% by parks. Gdansk inhabitants also produce quite a bit less waste than the average Pole at only 186 kg every year (against 217 kg).

The Hanseatic city also has quite a strong local economy (5th place in the ranking) thanks to foreign investments and tourism. It was ranked 9th with respect to local governance with an exceptionally large proportion of women serving on the City Board (36% against 25%) and an active civil society: 47 foundations and associations for 10,000 inhabitants, 30% more than the average. 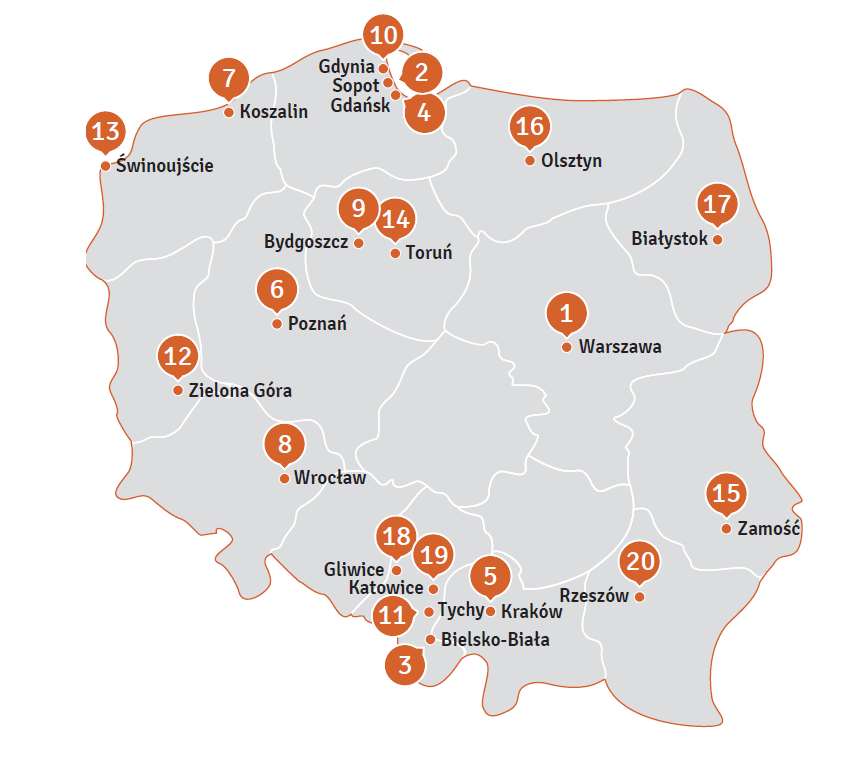 The city’s drawbacks lie surprisingly in quality of life (20th out of 66 cities), mostly due to fewer children who attend kindergarten and a rate of natural increase that is close to zero.

Krakow, leader of local governance – a legacy of its former status as the country’s capital?

The former Polish capital’s strength is definitively in local governance thanks to low public debt, high public investment and the popularity of the mayor, Jacek Majchrowski, who received 61% of votes in the first round of elections in 2014 (in office since 2002). If you’ve been in Krakow, you’re probably not surprised by its 3rd-place ranking with respect to quality of life or its strong local economy (9th), mostly thanks to its long tradition in tourism.

Unfortunately, Krakow is also known, not only in Poland but also in Europe, for its terrible air pollution. In fact, about 60 out of 100,000 inhabitants die every year (compared to almost 40 on average nationwide) because of it. That places the capital of Lesser Poland far behind national leaders in the field of the environment, which is dominated by Bydgoszcz with 657.5 points.

Surprises in the ranking

We just discovered Bydgoszcz is the greenest city in Poland. But the second safest one at work is Czestochowa (just behind the capital). Poznan is the city with the lowest unemployment in Poland (Warsaw is in 2nd) but when it comes to the age bracket of 55-64 years, the western city of Zielona Gora wins the palm with only 31.9%. And whereas salaries are quite high in Warsaw, surprisingly the highest average in the country is in the Silesian city of Jastrzebie Zdroj.

According to the report, the least sustainable cities (who received 350 points or less out of 1,000) are: Walbrzych, Sosnowiec (Silesia), Legnica (Lower Silesia), Konin (Greater Poland) and Chelm (Lublin voivodeship).

In the 2015 edition of the Social Diagnosis (general report about Polish society published yearly), Walbrzych occupied 23rd position (out of 28 cities) in terms of quality of living. But only 23.6% of inhabitants say they are happy to live in Walbrzych, the lowest rate nationwide (Sopot is known to be home of the happiest Poles with a 63% satisfaction level). However, the Silesian city has a good chance to improve its position in the coming years as local authorities invest in roads and housing and begin changing its image from that of a poor city to one that welcomes tourists and investors.